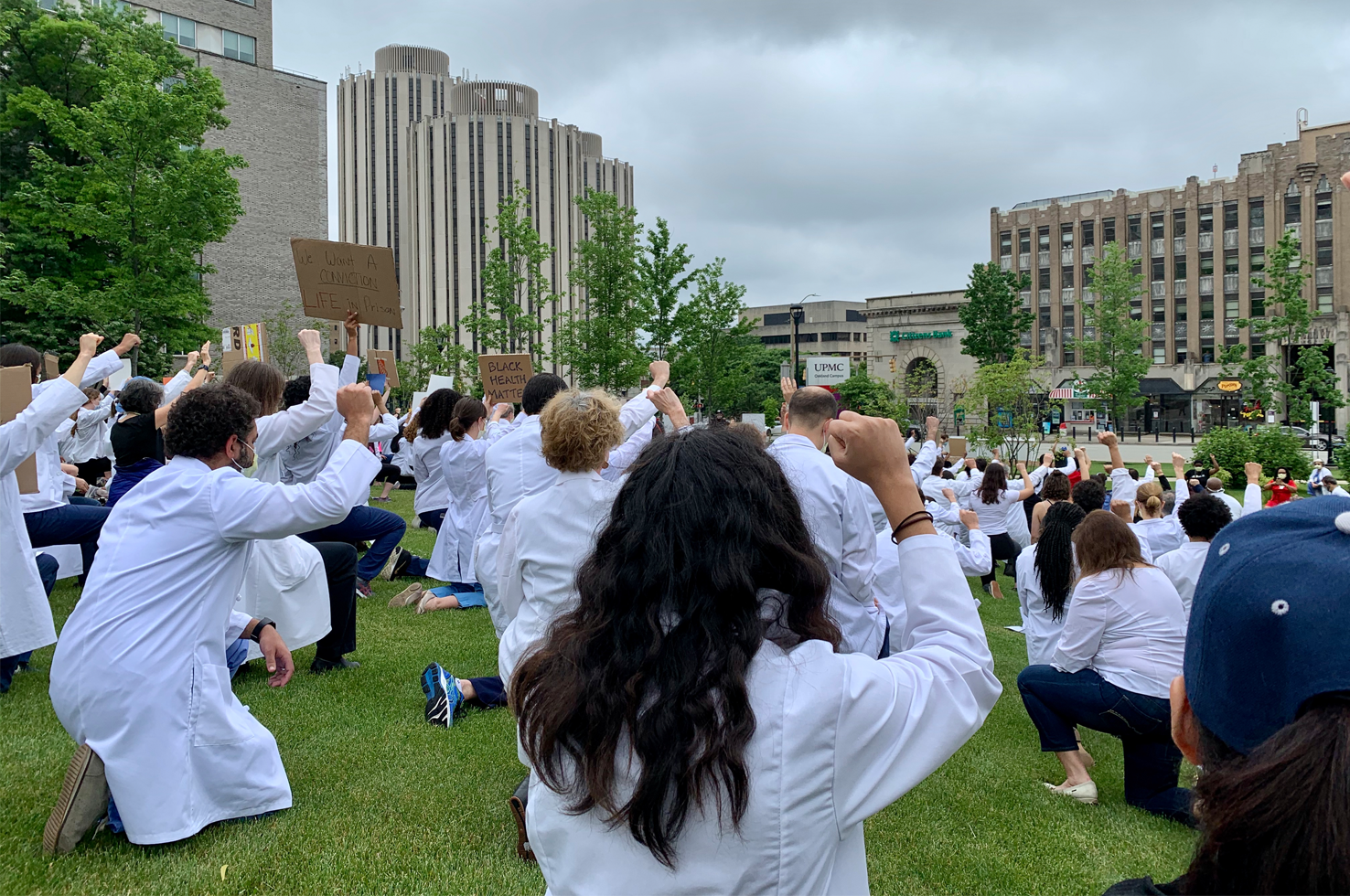 On June 5, 2020, physicians and health care workers from UPMC and the University of Pittsburgh School of Medicine gathered to protest systemic racism, a chronic and critically urgent public health crisis in this country. At noon, those assembled knelt for eight minutes and 46 seconds in honor of George Floyd, an African-American man who was killed last month in Minneapolis, MN.

Below, members of the Department of Psychiatry share why the event was personally meaningful and important.

To Protect and Preserve Life

The first line of the oath I took when I became a doctor was: 'I pledge to devote my life to the service of humanity.' Recent events have clearly shown that we have done a terrible job of this with respect to Black people in this country. Therefore, it was essential to stand in solidarity with other physicians who are charged to protect and preserve life, as the first step in a long journey of doing the work needed to fight systemic racism. (Susanne Ahmari, MD, PhD, Associate Professor of Psychiatry)

We in the Department of Psychiatry were honored to be invited as part of a greater commitment to the elimination of racial bias in medicine. Racism is a major public health issue, and it is well past time that we take a hard look at how we deliver care and make real changes towards ending racial healthcare inequality. (Jessica Gannon, MD, Assistant Professor of Psychiatry)

I think the event represented what our department, our school of medicine, our health care system is called to do – to do justice, love mercy and to walk humbly – as we serve our community. (Jessica Kettel, MD, PhD, Assistant Professor of Psychiatry)

It was powerful to participate in a demonstration of solidarity and a call for justice and action. Racism is a public health issue and it is time for health care professionals to unite to oppose racism. (Judith Morgan, PhD, Assistant Professor of Psychiatry)

I knelt with my colleagues at White Coats for Black Lives because I own that, as physician and psychiatrist, my field has a dark history in its participation in structural violence against communities of color. As we mourn with Black communities across the country, we also acknowledge that our white coats and degrees give us positions of power that make it a moral imperative to speak out and fight against systemic racism in solidarity with the Black Lives Matter movement. It comes with the job and our privilege. (Thy Vo, MD, MPH, Child & Adolescent Psychiatry Resident – PGY3)

Participating in the White Coats for Black Lives event was a meaningful way for me to express solidarity with other physicians and faculty in the vitally important and urgent task of ending racism. The event was a powerful demonstration of that solidarity, but the real work remains to be done. (David Lewis, MD, Chair, Department of Psychiatry)

It was important for me to participate in this event to support my Black colleagues, Black students and trainees, as well as members of the community that are impacted by systematic racism and police brutality. It was uplifting to see my colleagues come together to support this important cause. I hope that the Department of Psychiatry and the School of Medicine will continue to support these efforts. (Lauren Bylsma, PhD, Assistant Professor of Psychiatry and Psychology)

As a Black physician, the recent instances of police brutality and violence against Black Americans has been especially heart-breaking. Systemic racism is an issue that arises in health care every day. We have a lot of work to do to address these inequalities. The event was a meaningful opportunity for me and my colleagues to stand in solidarity with protestors across the country and to commit ourselves to working for change. (Piper Carroll, MD, Child and Adolescent Psychiatry Fellow)

I participated in the White Coats for Black Lives protest to join my friends and colleagues in expressing our commitment to ending systemic racism. I was pleased that so many of us were there. We need to address this problem now. (Duncan Clark, MD, PhD, Professor of Psychiatry and Associate Professor of Pharmaceutical Sciences)

As a minority physician, I believe it is important to spread awareness about systemic racism. Elements of systemic racism are prevalent everywhere, including in the delivery of healthcare. Showing support for the Black community is not something that should be up for debate. The community has been pleading to be heard for so long, it is our responsibility to listen and stand alongside them. (Hader Mansour, MD, PhD, Assistant Professor of Psychiatry)

As someone who worshipped in the Tree of Life building, I remember feeling some small consolation in knowing that people around the world were willing to show up to support my community. Showing up alone doesn’t solve problems that have taken centuries to develop, but being present is a first step. (Esther Teverovsky, MD, Assistant Professor of Psychiatry)

To Commit to Change

I believe Black lives matter. I believe it is my duty to be an ally and active participant in the fight against racial oppression that stems from individuals and institutions, including institutions of which I am a part-- medicine and academia. Participating in White Coats for Black Lives was an opportunity to publicly recognize that oppression and my commitment to fighting against it. (Jill Glausier, PhD, Assistant Professor of Psychiatry)

The time for fundamental systemic changes in our society and institutions is well overdue. As health care professionals, we need to look at ourselves in the mirror and ask what we are doing, or not doing, to continue perpetuating a racist system. We need to make sure that we maintain this momentum and that we are not lulled back into complacency. We need to continue amplifying and leveraging our collective voice to create meaningful anti-racist change on various levels, ranging from intrapersonal to policy. (Daniel Salahuddin, MD, MPH, Family Medicine & Psychiatry Resident – PGY3)

I went to the rally because I want to be part of this conversation. In reflecting on my own experience of white privilege in medicine, science and society in general, I've realized that I have shied away from discussions about race because of my own discomfort about saying the wrong thing or offending someone. Moving forward, I want to continue the conversation that began at the rally so that I can address my own implicit biases and help end the institutionalized racism in academic medicine and healthcare. (Matthew Geramita, MD, PhD, General Psychiatry Resident, PGY2)

Participating with my colleagues was an important opportunity to join in a collective public remembrance of George Floyd and all the victims of unwarranted, dehumanizing brutality, named and unnamed. To me, this action represents an intent to be anti-racist; it symbolizes a commitment to change institutionalized policies and practices that marginalize and under-represent—a commitment to improving social justice. (Brooke Molina, PhD, Professor of Psychiatry, Psychology and Pediatrics)

Attending the event was a way for me, as an African-American physician, to join the national protests highlighting the systemic racism, implicit bias, and social inequalities that have been faced by the Black community for hundreds of years. It was great to see so many UPMC physicians and health care professionals honor the lives of George Floyd, Ahmaud Aubrey, Breonna Taylor and countless others, particularly in light of the marginalization of Blacks within our very own city as revealed by "Pittsburgh's Inequality Across Gender and Race" report (2019).  I'm hopeful that the eight minutes and 46 seconds that we kneeled together was only the beginning and that we start having real conversations, demonstrating real empathy, and creating real change together. (Paula Powe, MD, Assistant Professor of Psychiatry).