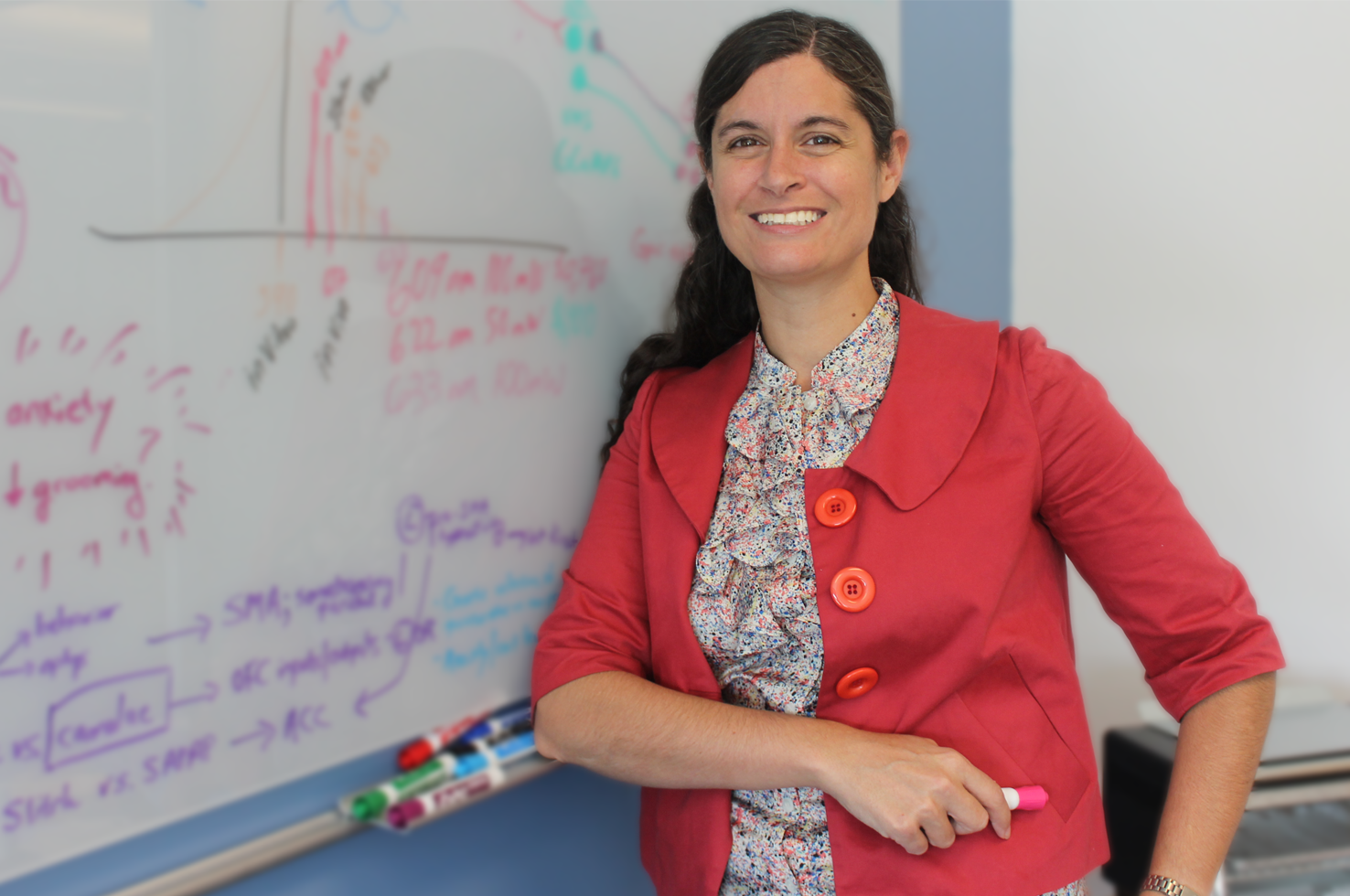 Obsessive-compulsive disorder (OCD) is a disabling illness characterized by obsessions that result in compulsive behavior. Underscoring the need for more effective treatments, existing first-line therapies lead to remission in just 10–15% of patients. However, the development of new therapies requires a better understanding of the molecular abnormalities that are present in OCD. A recent study from Pitt Department of Psychiatry researchers provides the first evidence of molecular alterations in OCD in two brain regions that have been consistently implicated in human imaging studies of the disorder—orbitofrontal cortex and striatum.

The new study, led by Susanne Ahmari, MD, PhD, in collaboration with Jill Glausier, PhD and David Lewis, MD, was published in the journal Molecular Psychiatry.

“Compared to other psychiatric disorders, we have a really limited understanding of the molecular abnormalities that underlie the obsessions and compulsions that patients with OCD experience,” said Dr. Ahmari. “Therefore, we wanted to take a first look at the molecular mechanisms underlying OCD to lay the groundwork for identifying new treatment targets.”

To explore the molecular mechanisms of OCD, Dr. Ahmari and colleagues used a technique called quantitative polymerase chain reaction to examine gene expression in brain tissue from eight people with OCD and eight healthy individuals. They used tissue samples from the orbitofrontal cortex and the striatum, which have been reported to be overactive in OCD human imaging studies. The orbitofrontal cortex plays an important role in deciding what actions to take and the striatum is important for carrying out those actions, functions that are impaired in OCD.

When deciding which genes to investigate for this initial study, the researchers turned to previous human genetic studies in OCD and related psychiatric illnesses, as well as studies in mice displaying OCD-relevant behaviors. “There are two major classes of neurons in the cortex and striatum—excitatory and inhibitory—that increase and decrease neuronal activity in downstream neurons, respectively. The list we came up with examined genes expressed in both excitatory and inhibitory neurons, but focused on excitatory neurons, consistent with previous findings that the neurons that connect the orbitofrontal cortex to the striatum are predominantly excitatory,” said Dr. Ahmari. Specifically, the researchers looked at genes that are related to synapses—the junctions between neurons that allow them to communicate with one another.

Dr. Ahmari and colleagues found that people with OCD had significantly lower gene expression related to excitatory synapses than people without OCD. This finding was true in both the orbitofrontal cortex and the striatum but was particularly prominent in the orbitofrontal cortex. In contrast, the expression of genes related to inhibitory synapses was largely unaffected in OCD.

“Our findings are really interesting when taken in the context of human imaging studies that generally show increased baseline activity in the orbitofrontal cortex and the striatum in OCD. We perhaps naively expected there to be increased excitatory synapse gene expression, but, in fact, we found the opposite,” said Dr. Ahmari. “These findings open up new hypotheses about what is going on in the OCD brain.” The researchers are currently exploring the possibility that the downregulated gene expression is a compensatory response to increased brain activity.

The current results were based on a small number of subjects, so the team is now in the process of collaborating with other institutions to replicate the findings. “Based on the fact that we looked at only eight subjects with OCD and still saw this strong effect, I’m optimistic that our findings are important for the biology of the illness,” said Dr. Ahmari.