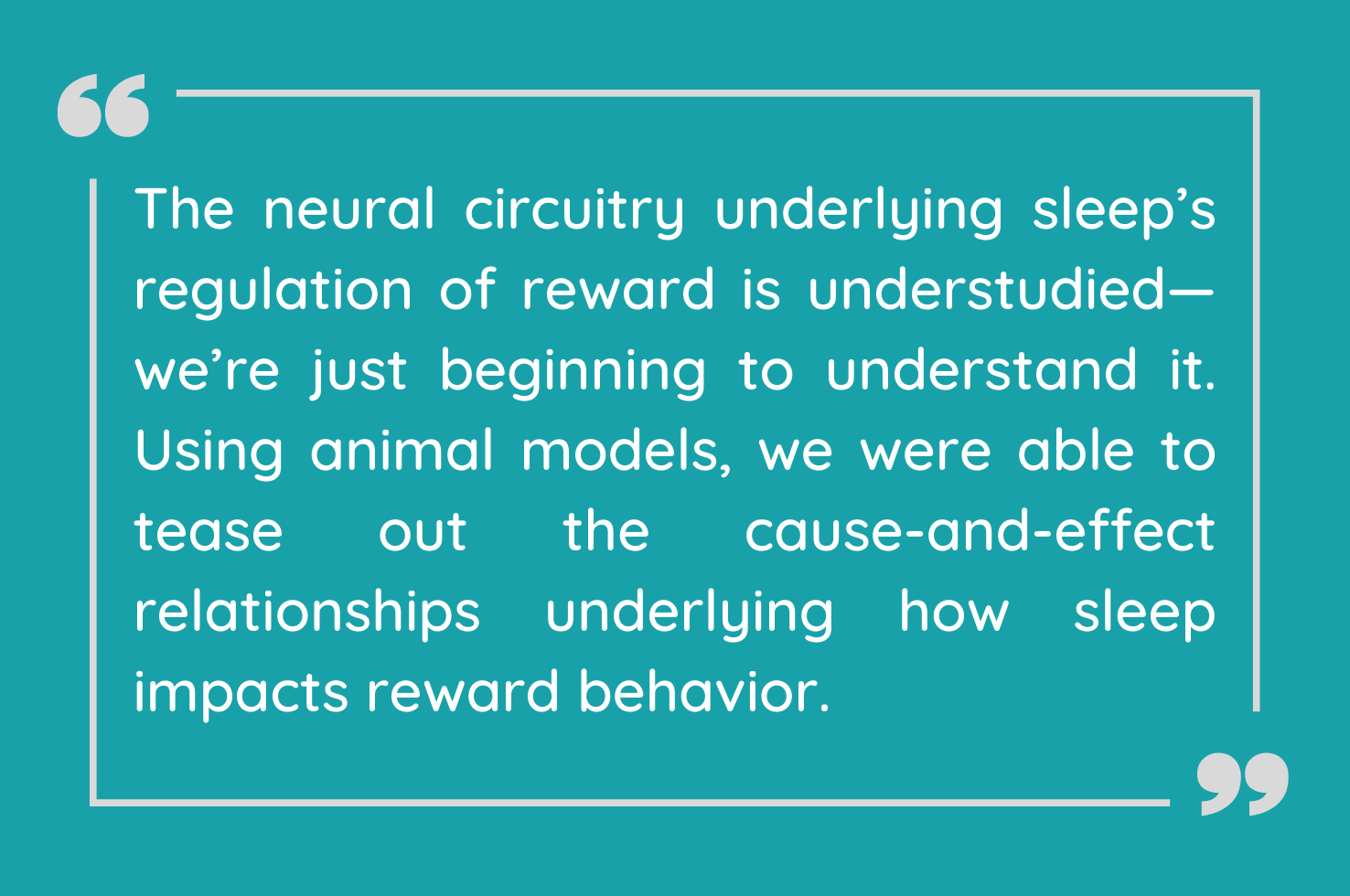 Regular sleep is critical for both health and optimal brain functioning. Sleep deprivation affects several regions within the brain’s reward circuitry, including the nucleus accumbens, the reward processing hub, as well as connected regions such as the amygdala. Changes in these brain regions are involved in impulsivity and increased drive for rewarding stimuli (such as sweet food), common symptoms of sleep deprivation.

The research team gently handled mice to prevent them from sleeping for six hours, a protocol that increases their reward-seeking behavior, measured as an increase in how often the mice press a lever to obtain sucrose pellets. They found that sleep deprivation also reduced the activity of a specific neural pathway from the rostral basolateral amygdala (rBLA) to the ventral lateral nucleus accumbens (vlNAc). Interestingly, boosting the activity of the same pathway with optogenetics reduced lever-pressing for sucrose in sleep-deprived mice, whereas inhibition of this pathway using chemogenetic technology in mice with normal sleep mimicked the sleep deprivation effect of increasing lever-pressing for sucrose.

To understand how the sucrose lever pressing test and the conditioned place preference test results fit together, it is important to understand the concept of ‘approach motivation,’ a desire to seek out a pleasant stimulus, explained Dr. Huang. “In many cases approach motivation and reward go hand-in-hand. If you are hungry, you will seek out a delicious food that is rewarding. Sometimes, however, the two are dissociated. After you’ve eaten enough of a delicious food and are satisfied, the satisfaction itself is rewarding, but it also reduces your motivation to eat more of the food. Our findings suggest the possibility that the sleep deprivation-induced reduction of rBLA to vlNAc transmission may enhance approach motivation for sucrose, rather than make the sucrose more rewarding,” she explained.

The new findings are important for understanding a number of psychiatric conditions marked by sleep disturbances and alterations in reward-seeking behavior, including eating disorders, substance use disorders, and affective disorders such as depression and anxiety. “We hope that a better understanding of sleep deprivation-induced regulation of reward systems may lead to new treatment avenues for these disabling conditions,” concluded Dr. Huang.