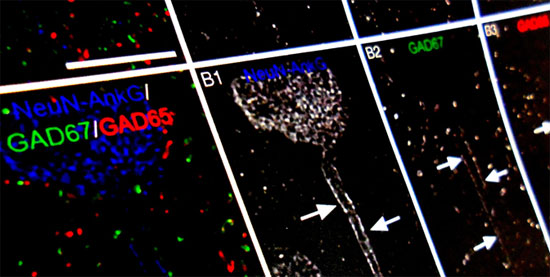 Although psychosis is the most striking feature of schizophrenia, cognitive dysfunction is now recognized as a core feature of the illness. Indeed, cognitive ability in this patient population is the best predictor of employment, social integration, and even relapse. However, current pharmacological treatments only address symptoms associated with psychosis. Consequently, it is critical to determine the neuronal circuitry alterations underlying cognitive dysfunction in schizophrenia in order to identify novel targets for therapeutic interventions.

Using a quantitative, multi-label confocal microscopic approach recently developed by Dr. Ken Fish in the Translational Neuroscience Program, Drs. Jill Glausier, Ken Fish, and David Lewis performed the first analysis of the number of PVBC connections, as well as the relative amounts of key proteins within these synaptic connections, in the PFC of individuals diagnosed with schizophrenia. Surprisingly, the investigators found that the number of PVBC connections did not differ in schizophrenia subjects, but that the amount of parvalbumin per PVBC connection was significantly lower. This combination of lower protein levels with preserved PVBC synaptic abundance demonstrates that PVBC dysfunction in schizophrenia reflects molecular and not structural alterations. Because PVBC connections are still present in the illness, modulating their activity represents a viable option to restore PFC functioning in individuals with schizophrenia.

The results of this investigation were published in Molecular Psychiatry.  Click here for a link to the abstract.