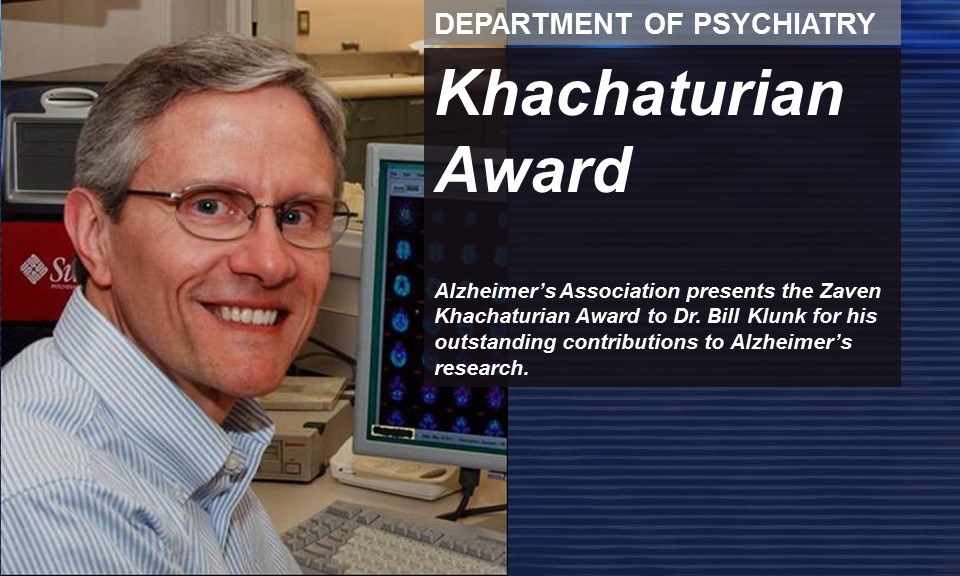 The Alzheimer's Association has presented Dr. Bill Klunk with the 2017 Zaven Khachaturian Award at the association's 2017 international conference in London. The award is named in honor of noted scientist and author, Zaven Khachaturian, PhD. Dr. Khachaturian held an academic appointment in the Pitt Department of Psychiatry from 1969 to 1977 and was Vice-President for Research at the University of Pittsburgh before leaving to build the Neuroscience of Aging Program at the National Institute on Aging in 1977.  He was responsible for planning and establishing the national infrastructure for Alzheimer's disease research that flourishes today. The Zaven Khachaturian Award recognizes an individual whose compelling vision, selfless dedication, and extraordinary achievement has significantly advanced the field of Alzheimer science.

"Dr. Klunk's contributions to Alzheimer's disease research have changed not only how we understand the disease today, but have been the harbinger of an era of prevention of Alzheimer's based on this knowledge. He is a most deserving recipient of the Zaven Khachaturian Award,? said Dr. Maria Carrillo, chief science officer for the Alzheimer's Association. She added that the work of Dr. Klunk and his colleague Chet Mathis, PhD in Radiology enabling amyloid imaging in the human brain "has been transformational for the field of Alzheimer's research. Dr. Klunk is a tireless and dedicated researcher who is advancing our understanding of Alzheimer's at the earliest stages."

Dr. Klunk is a Distinguished Professor of Psychiatry and Neurology and the Levidow-Pittsburgh Foundation Chair in Alzheimer's Disease and Dementia Disorders. He also co-directs the Alzheimer's Disease Research Center at the University of Pittsburgh, and serves as the director of the Laboratory of Molecular Neuropharmacology at Western Psychiatric Institute and Clinic of UPMC. He has published more than 200 journal articles, and is principal investigator of several federal and foundation grants. Dr. Klunk's research group's paper, "Imaging Brain Amyloid in Alzheimer's Disease with Pittsburgh Compound-B," remains the most frequently cited research article in the field of Alzheimer's disease neuroimaging since its publication in 2004.  Among the many honors that Dr. Klunk has received for his work are a MERIT Award from the National Institute on Aging (2004), the Potamkin Prize (2008) and the Ronald and Nancy Reagan Research Institute Award (2009) for research in Alzheimer's disease.