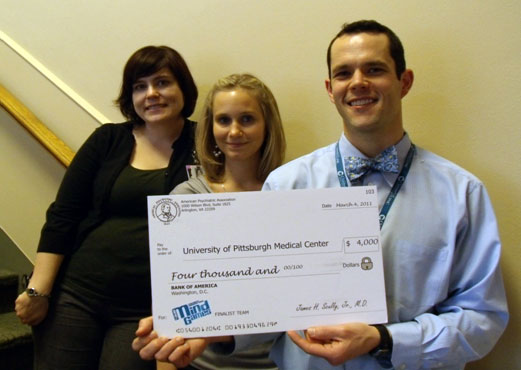 The WPIC Residency Training team of Drs. Sarah Wolfe, Shannon Allen, and Ryan Herringa scored in the top 3 teams out of 125 teams from across the United States competing in the 2011 MINDGAMES competition sponsored by the American Psychiatric Association (APA). The top three residency programs with the highest score receive a $4,000 grant from the APA to attend the national MINDGAMES competition for residents at the 2011 APA Annual Meeting in Honolulu, Hawaii. The preliminary qualifying phase is an online contest where general psychiatry residency programs take a timed examination. The game pits residency programs against each other in a battle to the final competition. Drs. Wolfe, Allen, and Herringa will represent WPIC in the final competition at the annual APA meeting on May 17, 2011 against the Boston University Medical Center and New York Presbyterian/Cornell.

Congratulations Drs. Wolfe, Allen and Herringa and Good Luck in the Final Competition!