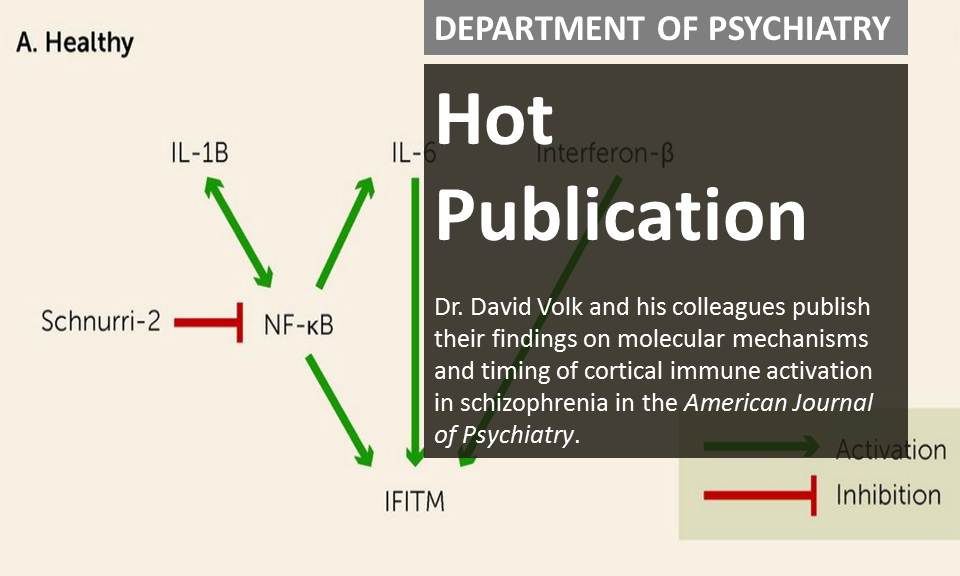 Immune-related abnormalities are commonly reported in schizophrenia, including higher mRNA levels for the viral restriction factor interferon-induced transmembrane protein (IFITM) in the prefrontal cortex (PFC). However, it is unclear whether higher IFITM mRNA levels and other immune-related disturbances in the PFC are the consequence of an ongoing molecular cascade contributing to immune activation or the reflection of a long-lasting maladaptive response to an immune-related insult that occurred in utero.

Dr. David Volk and investigators in the Translational Neuroscience Program employed quantitative PCR to measure mRNA levels for immune-related cytokines and transcriptional regulators, including those reported to regulate IFITM expression, in the PFC from 62 schizophrenia and 62 healthy subjects and from adult mice exposed prenatally to maternal immune activation (MIA) or in adulthood to the immune stimulant poly(I:C).

The investigators found that schizophrenia patients had markedly higher mRNA levels for IL-6 (+379%) and interferon-? (+29%), which induce IFITM expression; lower mRNA levels for Schnurri-2 (-10%), atranscriptional inhibitor that lowers IFITM expression; and higher mRNA levels for nuclear factor-?B (+86%), a critical transcription factor that mediates cytokine regulation of immune-related gene expression. In adult mice that received daily poly(I:C) injections, but not in MIA offspring, frontal cortex mRNA levels were also markedly elevated for IFITM (+304%), multiple cytokines including IL-6 (+493%), and nuclear factor-?B (+151%).
The findings from this study suggest that higher PFC IFITM mRNA levels in schizophrenia may be attributable to adult, but not prenatal, activation of multiple immune markers and encourage further investigation into the potential role of these and other immune markers as therapeutic targets in schizophrenia.

This article appeared in the American Journal of Psychiatry.  Click here to view the abstract.