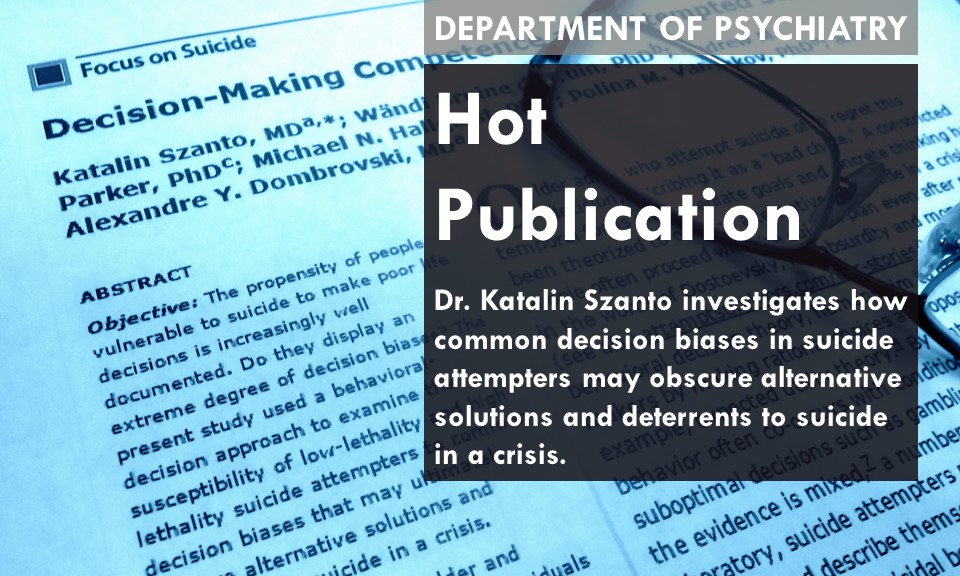 Decision biases are systematic deviations from normative (rational) choices that aim to provide the decision maker with the maximum likelihood of the desired outcome. While the propensity of people vulnerable to suicide to make poor life decisions is increasingly well documented, little is known about whether these individuals display an extreme degree of decision biases.  Using a behavioral-decision approach, Dr. Katalin Szanto and her colleagues examined the susceptibility of low-lethality and high-lethality suicide attempters to common decision biases that may ultimately obscure alternative solutions and deterrents to suicide in a crisis.

This study lays the ground work for future research investigating whether suicide attempters' failure to resist framing may reflect their inability to consider a decision from an objective standpoint in a crisis.  It also has important implications for investigators wanting to examine whether failure of low-lethality attempters to resist sunk cost may also reflect their tendency to confuse past and future costs of their behavior, lowering their threshold for acting on suicidal thoughts.

This article appears in the Journal of Clinical Psychiatry. Click here to view the abstract.