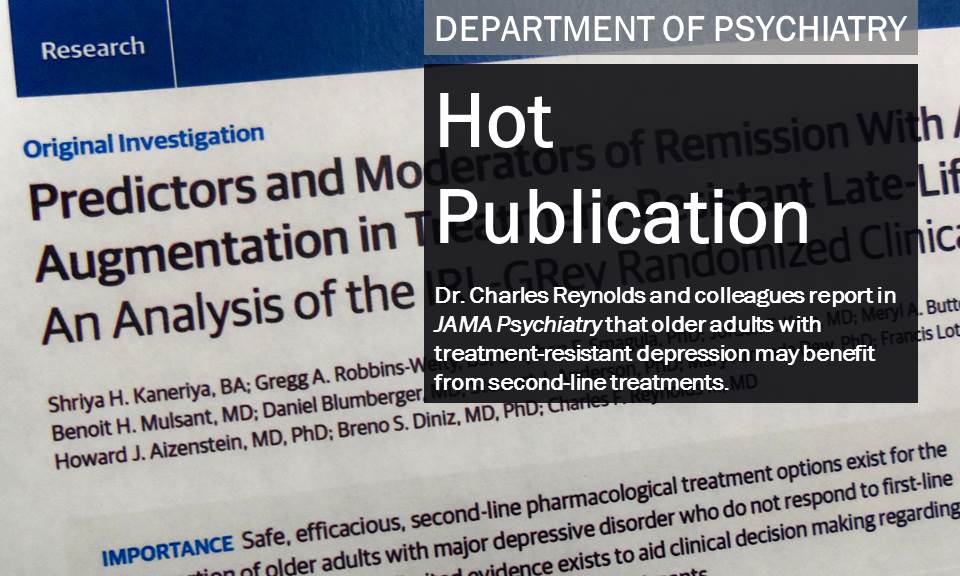 Safe, efficacious, second-line pharmacological treatment options exist for the large portion of older adults with major depressive disorder who do not respond to first-line pharmacotherapy. However, limited evidence exists to aid clinical decision making regarding which patients will benefit from which second-line treatments.

Dr. Charles F. Reynolds, III and his colleagues tested the moderating role of pretreatment executive function, severity of anxiety, and severity of medical comorbidity in remission of treatment-resistant late-life depression after aripiprazole augmentation. As follow-up to a 12-week randomized clinical trial of aripiprazole augmentation for first-line treatment-resistant late-life depression (Incomplete Response in Late-Life Depression: Getting to Remission [IRL-GRey]), they evaluated the effects of the following potential moderators and their interactions with treatment: baseline assessments of executive function (set shifting measured by the Trail Making Test) and response inhibition control (measured by a Color-Word Interference task), anxiety symptoms, and medical comorbidity. One hundred and eighty one participants aged 60 years of age or older and whose major depression had failed to remit with venlafaxine hydrochloride monotherapy were recruited for the study. Aripiprazole or placebo tablets were started at 2 mg daily and titrated as tolerated, to a maximal dose of 15 mg daily.

The results of the study showed remission of treatment-resistant late-life depression (defined as a Montgomery-Åsberg Depression Rating Scale score of <10 at both of the last 2 consecutive visits).  Of the 181 trial participants, 91 received aripiprazole and 90 received placebo.  Remission occurred in 43% of the individuals who received aripiprazole and 29% who received placebo. Baseline set shifting moderated the efficacy of aripiprazole augmentation. Among participants with a Trail Making Test scaled score of 7 or higher, the odds of remission were significantly higher with aripiprazole than with placebo (53% vs 28%). Among participants with a Trail Making Test scaled score of less than 7, aripiprazole and placebo were equally efficacious. Greater severity of anxiety at baseline predicted a lower remission rate but did not moderate aripiprazole efficacy; each standard deviation greater anxiety severity was associated with 50% reduced odds of remission in both aripiprazole and placebo arms. Medical comorbidity and Color-Word Interference test performance were neither general predictors nor treatment-moderating factors.

The investigators found that set-shifting performance indicates which older adults with treatment-resistant depression may respond favorably to augmentation with aripiprazole, and thus may help to personalize treatment for older patients.

This article was published in JAMA Psychiatry.  To view the abstract, click here.