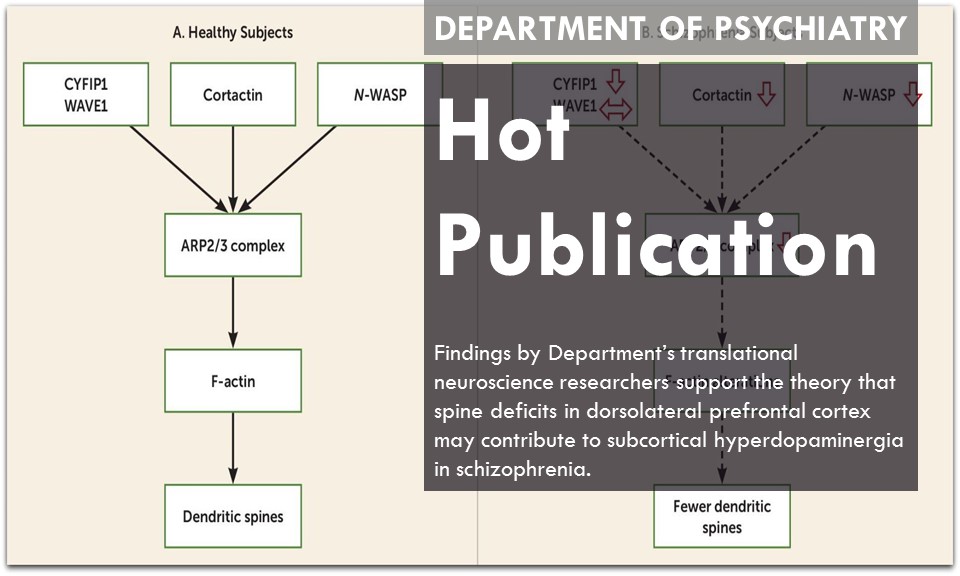 Lower dendritic spine density on layer 3 pyramidal cells in the dorsolateral prefrontal cortex (DLPFC) appears to contribute to cognitive dysfunction in schizophrenia, whereas psychosis is associated with excessive dopamine release in the striatum. These findings might be related via excitatory projections from the DLPFC to the ventral mesencephalon, the location of dopamine cells projecting to the striatum. Consistent with this hypothesis, deletion of the actin-related protein-2/3 (ARP2/3) complex, which regulates the actin cytoskeleton supporting dendritic spines, produced spine loss in cortical pyramidal cells and an antipsychotic-response elevation of dopamine in the striatum in mice. However, whether the ARP2/3 complex is altered in schizophrenia is unknown.

Under the mentorship of Drs. David Lewis and David Volk, Dr. Dibyadeep Datta assessed transcript levels of ARP2/3 complex signaling pathway in laser-microdissected DLPFC layer 3 and 5 pyramidal cells and layer 3 parvalbumin interneurons, and in total DLPFC gray matter in matched pairs of schizophrenia and comparison subjects.  The investigators found that transcript levels of ARP2/3 complex subunits, and of nucleation promotion factors that regulate the ARP2/3 complex, were significantly lower in DLPFC layer 3 and 5 pyramidal cells in schizophrenia. In contrast, these transcripts were unaltered, or only modestly changed, in parvalbumin interneurons and DLPFC gray matter.

Results of this study indicate that downregulation of the ARP2/3 complex signaling pathway, a common final pathway for multiple signaling cascades that regulate the actin cytoskeleton, would compromise the structural stability of spines, leading to their loss. In concert with findings from deletion of the ARP2/3 complex in mice, these findings support the idea that spine deficits in the DLPFC might contribute to subcortical hyperdopaminergia and psychosis in schizophrenia.

This article was published online in the American Journal of Psychiatry.  Click here to view the abstract.