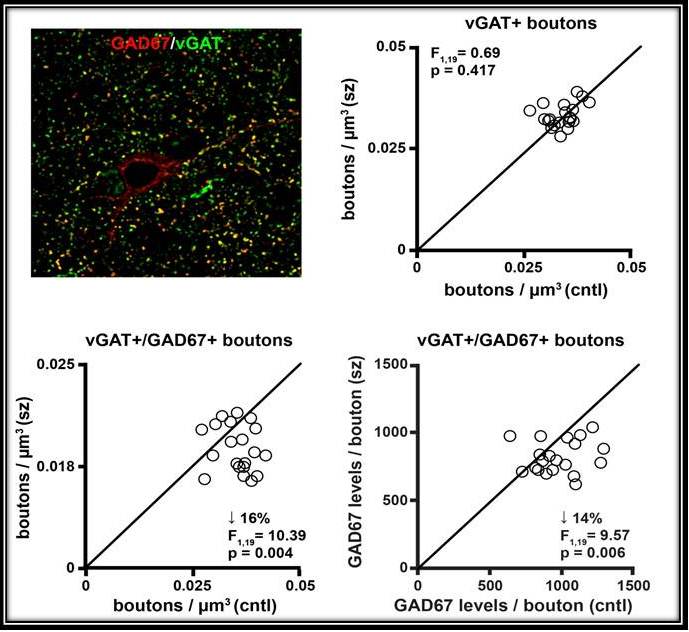 Convergent findings indicate that cortical GABAergic circuitry is altered in schizophrenia. Postmortem studies have consistently found lower levels of GAD67 mRNA in the prefrontal cortex (PFC) of subjects with schizophrenia. At the cellular level, the density of GABA neurons with detectable levels of GAD67 mRNA is approximately 30% lower across cortical layers.  Knowing how this transcript deficit translates to GAD67 protein levels in axonal boutons is important for understanding the impact it might have on GABA synthesis. In addition, because reductions in GAD67 expression prior to, but not after, the maturation of GABAergic boutons results in a lower density of GABAergic boutons in mouse cortical cultures, knowing if GABAergic bouton density is altered in schizophrenia would provide insight into the timing of the GAD67 deficit.

Working with his mentors Drs. Ken Fish and David Lewis in the Translational Neuroscience Program, Dr. Brad Rocco examined PFC tissue sections from 20 matched pairs of schizophrenia and comparison subjects that were immunolabeled for the vesicular GABA transporter (vGAT) and GAD67.   The investigators found that vGAT+ bouton density did not differ between subject groups, consistent with findings that vGAT mRNA levels are unaltered in the illness, and confirming that the number of cortical GABAergic boutons is not lower in schizophrenia.

In contrast, in schizophrenia subjects the proportion of vGAT+ boutons with detectable GAD67 levels (vGAT+/GAD67+ boutons) was 16% lower and mean GAD67 levels were 14% lower in the remaining vGAT+/GAD67+ boutons.  Findings from this study suggest that GABA production is markedly reduced in a subset of boutons in the PFC of schizophrenia subjects, and that this reduction likely occurs after the maturation of GABAergic boutons.

This article was published online in the journal Biological Psychiatry.  Click here to view the abstract.