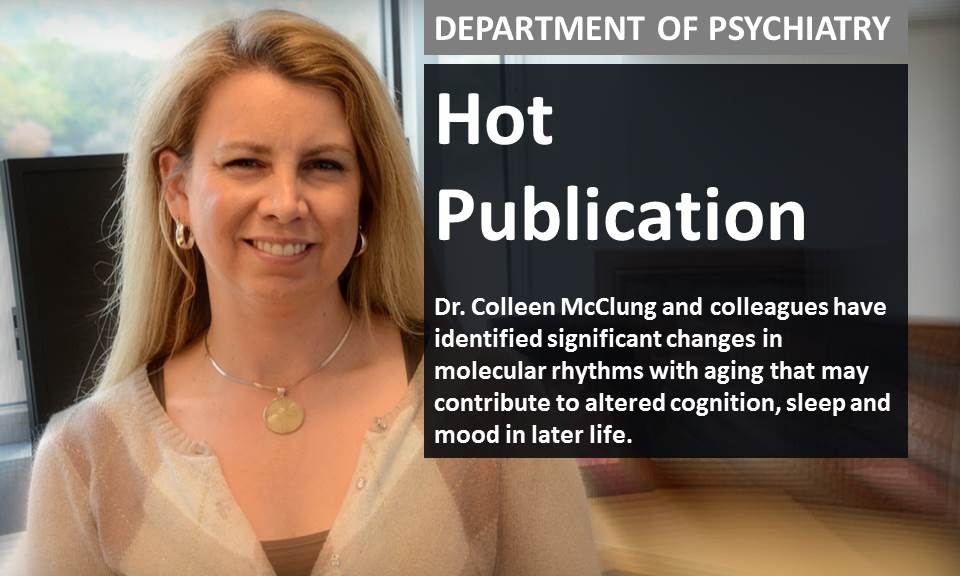 Examination of thousands of genes from nearly 150 human brains shows the circadian rhythm of gene activity changes with aging, according to a first-of-its-kind study conducted by researchers at the University of Pittsburgh School of Medicine. The findings, published online in the Proceedings of the National Academy of Sciences, suggest also that a novel biological clock begins ticking only in the older brain.

A 24-hour circadian rhythm controls nearly all brain and body processes, such as the sleep/wake cycle, metabolism, alertness and cognition, said senior investigator Colleen McClung, PhD, Associate Professor of Psychiatry. These daily activity patterns are regulated by certain genes that are found in almost all cells, but have rarely been studied in the human brain.

"Studies have reported that older adults tend to perform complex cognitive tasks better in the morning and get worse through the day," Dr. McClung said. "We know also that the circadian rhythm changes with aging, leading to awakening earlier in the morning, fewer hours of sleep and less robust body temperature rhythms."

In addition, the presence of gene changes or "molecular aging" in the brain had been previously shown by co-author Dr. Etienne Sibille of the University of Toronto. Both teams decided to look at the effects of normal aging on molecular rhythms in the human prefrontal cortex, an area of the brain involved in learning, memory and other aspects of cognitive performance.

The team examined brain samples of 146 people with no history of mental health or neurological problems whose families had donated their remains for medical research and for whom the time of death was known. They categorized the brains depending on whether they had come from a person younger than 40 or older than 60, and used a newly developed statistical technique to analyze two tissue samples from the prefrontal cortex for rhythmic activity, or expression, of thousands of genes. Using the information they had about the time of death, they identified 235 core genes that make up the molecular clock in this part of the brain.

"As we expected, younger people had that daily rhythm in all the classic 'clock' genes," Dr. McClung said. "But there was a loss of rhythm in many of these genes in older people, which might explain some of the alterations that occur in sleep, cognition and mood in later life."

To their surprise, the team also found a set of genes that gained rhythmicity in older individuals.

This information could ultimately be useful in the development of treatments for cognitive and sleep problems that can occur with aging, as well as a possible treatment for "sundowning," a condition in which older individuals with dementia become agitated, confused and anxious in the evening.

"Since depression is associated with accelerated molecular aging, and with disruptions in daily routines, these results also may shed light on molecular changes occurring in adults with depression," said Dr. Sibille.

In next steps, the researchers will explore the function of the brain's circadian-rhythm genes in lab and animal models, as well as see if they are altered in people who have psychiatric or neurological illnesses.

Etienne Sibille, PhD (Departments of Psychiatry, and of Pharmacology and Toxicology, University of Toronto)

This article appeared in the Proceedings of the National Academy of Science.  To view the abstract, click here.