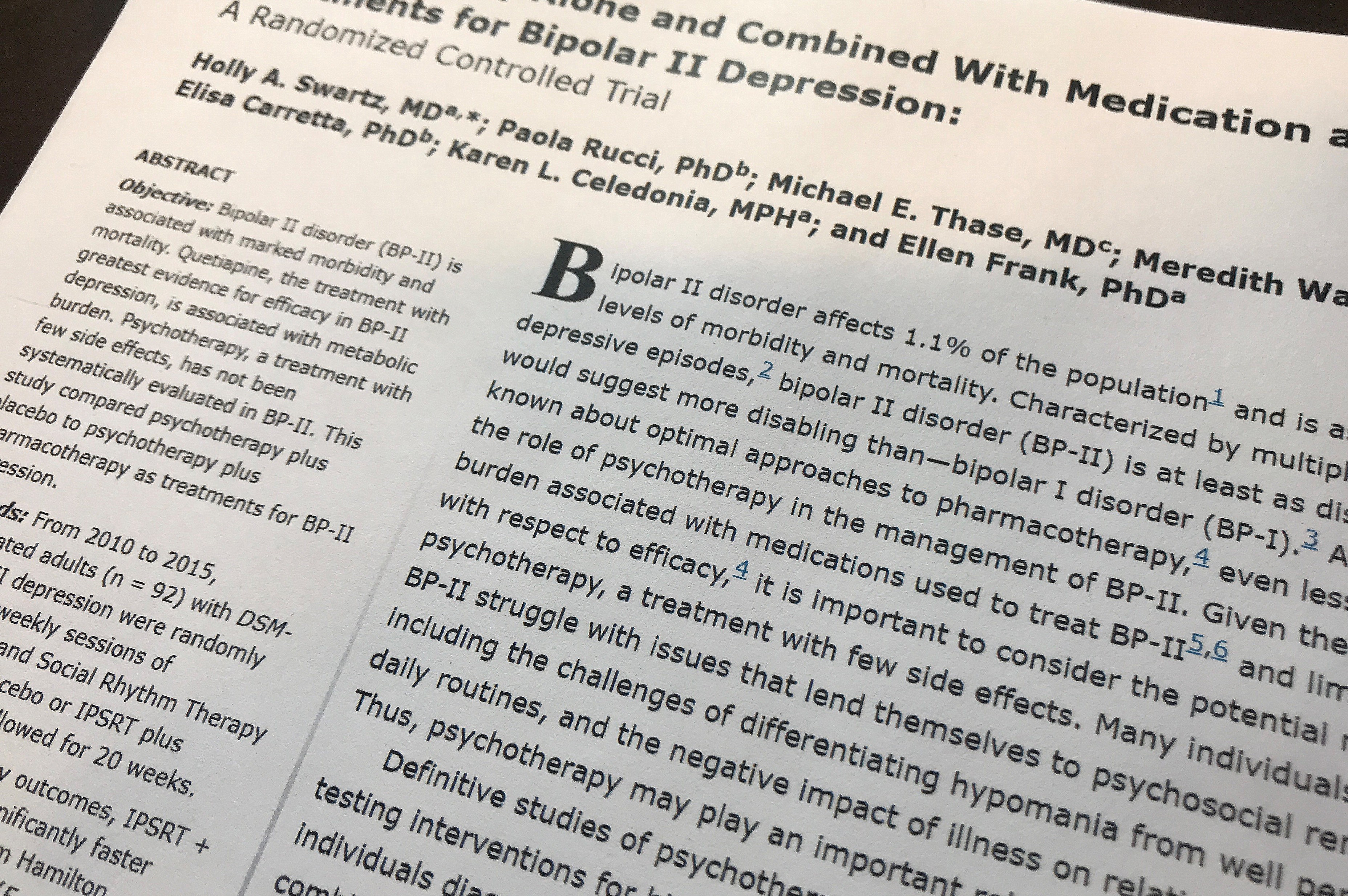 Despite being common and impairing, bipolar II disorder (BD II) is a neglected condition. BD II is characterized by multiple recurrent depressive episodes punctuated by infrequent hypomanic episodes.  In one longitudinal study, the ratio of depressive to hypomanic episodes over time was 30:1.  Thus, BD II is dominated by depression which, though less striking than mania (a more severe form of hypomania), can be the more problematic pole of the disorder.  Bipolar depression is notoriously difficult to treat and drives much of the morbidity and mortality associated with bipolar disorder. Quetiapine, the treatment with greatest evidence for efficacy in BD II depression, is associated with significant metabolic burden. Psychotherapy, a treatment with few side effects, has not been systematically evaluated in BD II.

Holly Swartz, MD, collaborating with Department faculty Meredith Wallace, PhD and Ellen Frank, PhD and others compared psychotherapy plus placebo to psychotherapy plus pharmacotherapy as treatments for BD II depression. They randomly assigned unmedicated adults (n = 92) with DSM-IV-TR BD II depression to weekly sessions of Interpersonal and Social Rhythm Therapy (IPSRT) plus placebo or IPSRT plus quetiapine and followed them for 20 weeks.

For primary outcomes, IPSRT + quetiapine yielded significantly faster improvement on 17-item Hamilton Depression Rating Scale and greater improvement on Young Mania Rating Scale scores. Both groups, however, improved significantly over time with similar response rates: 67.4% (62/92) in the entire sample, with no differences between the two groups. Those randomly assigned to their preferred treatment were 4.5 times more likely to respond. IPSRT + quetiapine assignment was associated with significantly higher body mass index over time and with rates of dry mouth and a trend toward more complaints of feeling over sedated.

In summary, IPSRT plus quetiapine resulted in greater symptomatic improvement but also more side effects than IPSRT alone. A subset of participants improved with IPSRT alone, suggesting that for some individuals with BD II depression psychotherapy alone may suffice.  Absence of an inactive comparison group (such as placebo alone) limits interpretation of this finding. Receipt of preferred treatment was associated with better outcomes. The authors concluded that clinicians should consider harms, benefits, and preferences when recommending treatments for BD II depression, and consider both pharmacotherapy and psychotherapy as potential options.