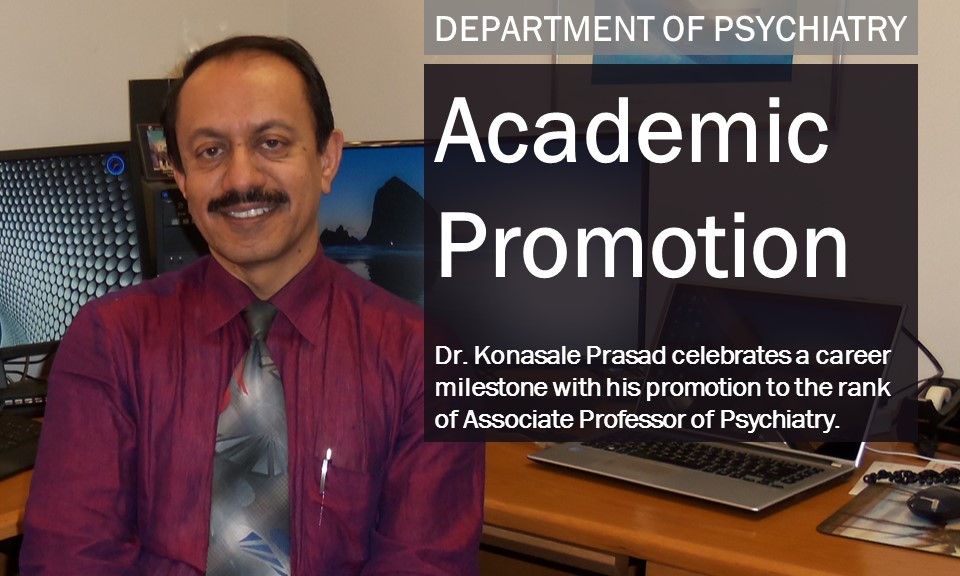 The Department of Psychiatry is pleased to announce the promotion of Konasale Prasad, MD to the rank of Associate Professor of Psychiatry. Dr. Prasad is a nationally recognized researcher in the field of schizophrenia and cognitive impairments, a dedicated clinician, and a thoughtful teacher and mentor.

After earning his medical degree from the Government Medical College in India, he completed residencies at the National Institute of Mental Health and Neurosciences, The Oxford Deanery and Western Psychiatric Institute and Clinic of UPMC (WPIC). He obtained postdoctoral training at the University of Pittsburgh prior to his appointment to the Department of Psychiatry faculty in 2005. Dr. Prasad was one of the founding physicians of the Services for the Treatment of Early Psychosis (STEP) Clinic at WPIC, a highly specialized program which provides services to persons manifesting early signs of schizophrenia or related disorders.

Using cutting-edge PET and MRI methods, Dr. Prasad's research seeks to characterize molecular markers associated with neuroinflammation in schizophrenia. His findings have increased our understanding of pathophysiological processes underlying schizophrenia and contributed to the development of innovative treatments for patients diagnosed with this disorder. Dr. Prasad is the recipient of a Career Development Award from the National Institute of Mental Health and serves as the Principal Investigator or co-Principal Investigator for multiple projects funded by the National Institutes of Health (NIH).  He is currently a co-investigator on four other externally sponsored projects. Dr. Prasad has disseminated his work through over 80 peer-reviewed journal articles and presented his findings at numerous conferences and scientific meetings. He reviews for several important journals and has reviewed proposals for the NIH, the Ontario Mental Health Foundation in Canada, and the Wellcome Trust in the United Kingdom.

Congratulations to Dr. Prasad on his promotion and we look forward to his future contributions to the field.