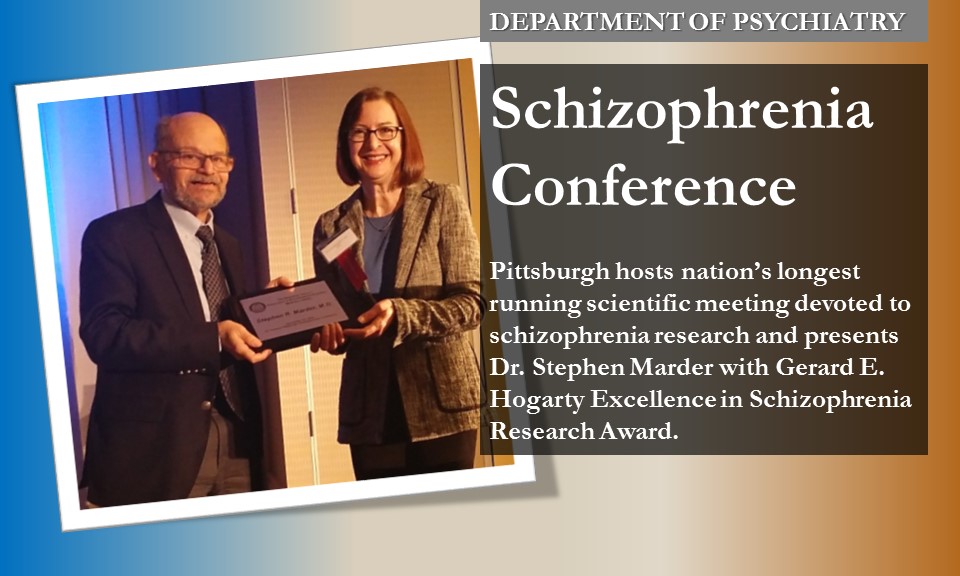 The 33rd Annual Pittsburgh Schizophrenia Conference is the nation's longest running scientific meeting devoted to exploring the latest research findings related to schizophrenia and other psychotic disorders.  This year's conference took place on November 18, 2016 at the Sheraton Station Square and attracted participants and attendees from across the United States.

The Gerald E. Hogarty Excellence in Schizophrenia Research Memorial Award was presented by Mrs. Susan Hogarty to Stephen Marder, MD, Professor of Psychiatry and Biobehavioral Sciences at the UCLA David Geffen School of Medicine, in recognition of his contributions to the field of schizophrenia research. The award is named in honor of Gerard E. Hogarty, MSW, a distinguished member of the Department of Psychiatry faculty who dedicated his research and clinical career to improving the lives of persons with schizophrenia through the rigorous development and testing of novel psychosocial treatment approaches. Dr. Marder was the featured speaker at the conference, where he presented on New Clinical Targets for Improving Functioning in Schizophrenia.

The conference also included presentations on a number of diverse topics including translating results from animal models research to humans with schizophrenia, early detection and intervention, synaptic pathology in schizophrenia, and a panel discussion led by department faculty and members of the clergy focusing on spirituality and recovery to mental health.