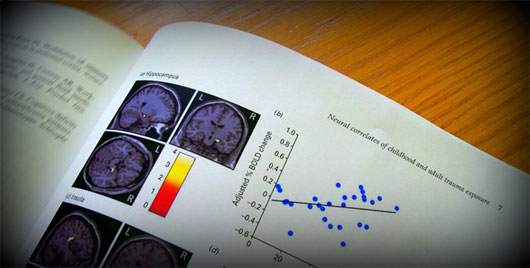 Results showed that both childhood and adult trauma exposure were associated with increasing activation of the dorsal anterior cingulate cortex in response to threat stimuli. This brain region is involved in the expression of fear, and the results suggest that both early and adult trauma exposure may sensitize this region to threat.  In comparison, PTSS was associated with increasing activation in limbic regions involved in fear responses.  Thus, childhood and adult trauma may sensitize a fear regulatory area of the brain towards the promotion of fear responses, upon which additional changes in fear circuitry may emerge in the development of PTSD symptoms.

This study was published online in the October 2012 issue of Psychological Medicine. Click here for a link to the abstract.