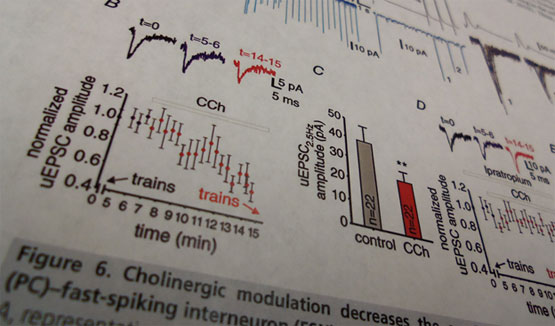 Cognitive functions such as working memory, the ability to hold and use small amounts of information in one?s mind for a short period of time, depend on the rhythmic activity of networks of neurons known as gamma oscillations. Signaling through acetylcholine receptors modulates gamma oscillatory activity; for example, the cholinergic agonist carbachol can induce gamma oscillations in vitro. In order to better understand how cholinergic signaling impacts gamma oscillations, Drs. Diego Pafundo, Guillermo Gonzalez-Burgos and their colleagues examined the effects of carbachol on cell types that contribute to oscillations ? excitatory pyramidal cells and fast-spiking inhibitory interneurons ? by performing electrophysiological recordings in prefrontal cortex brain slices prepared from mice.

The researchers found that carbachol both elevated the firing of pyramidal cells and increased the excitatory synaptic inputs from pyramidal cells onto fast-spiking interneurons. Upon examining connected pairs of pyramidal cells and fast-spiking interneurons, the investigators observed that carbachol also affected the synaptic transmission between the two cell types. The net effects were an equalization of the synaptic strength of many neurons and an increase in the number of cells that fired during an oscillatory cycle. Both effects were stable across relatively long periods of gamma oscillatory activity. Taken together, the results suggest that cholinergic modulation supports gamma oscillatory synchrony during prolonged periods of oscillatory activity, such as those found during working memory. A better understanding of the mechanisms underlying gamma oscillations may someday lead to better treatments for schizophrenia, an illness that is characterized by altered gamma oscillatory activity and impaired working memory.

The results of this investigation were published in the Journal of Physiology.  Click here for a link to the abstract.