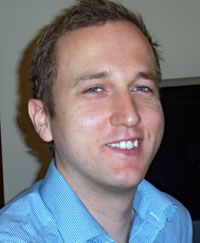 The Department of Psychiatry is pleased to announce the appointment of Henry Chase, PhD as a Research Instructor in Psychiatry. Dr. Chase is conducting research in the area of major depression and bipolar disorder, specifically using neuropsychological and functional neuroimaging methods. He has been actively engaged in research in the Department's Mood and Brain Laboratory (Mary Phillips, MD -  Director). The lab is devoted to identifying specific functional and structural abnormalities in neural systems underlying the different processes important for emotion processing and emotion regulation that may be present as objective biomarkers in individuals with major psychiatric illnesses, including bipolar disorder, unipolar depression, schizophrenia, and obsessive-compulsive disorder.

After earning an undergraduate degree in Physiology and Pharmacology and a Master's degree in Clinical Neuroscience from the University College London, Dr. Chase attended the University of Cambridge where he obtained a Master's degree and doctorate in Experimental Psychology. He completed postdoctoral training in neuropsychological and functional imaging methods under the mentorship of Dr. Lee Hogarth at the University of Nottingham before arriving in Pittsburgh in 2011 to begin a postdoctoral position in Dr. Phillips' laboratory. He has co-authored numerous publications in important scientific journals including Biological Psychiatry, Molecular Psychiatry, and the European Journal of Neuroscience and has served as a reviewer for those publications as well as several other journals.

Please join us in welcoming Dr. Chase to the department.