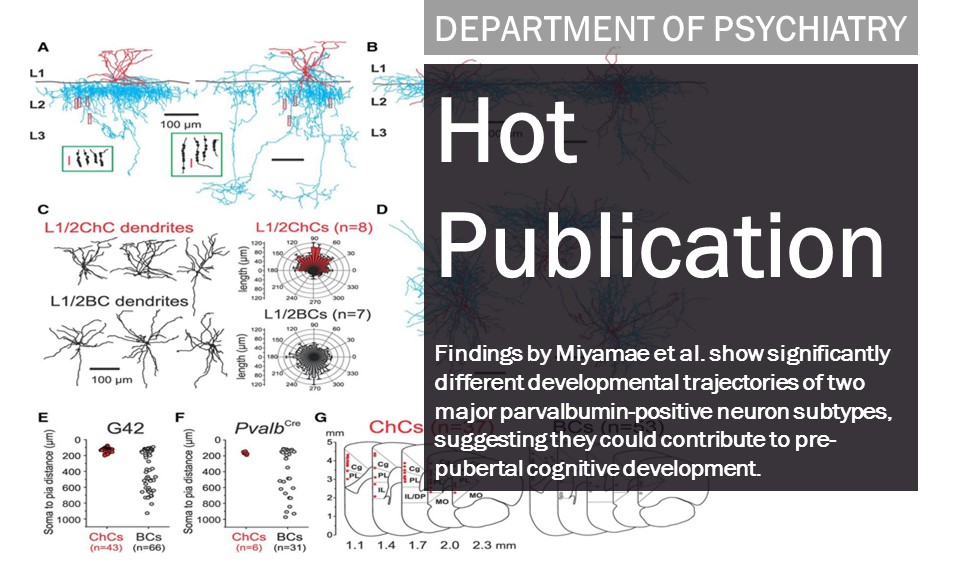 Parvalbumin-positive (PV+) neurons control the timing of pyramidal cell output in cortical neuron networks. In the prefrontal cortex (PFC), PV+ neuron activity is involved in cognitive function, suggesting that PV+ neuron maturation is critical for cognitive development. The two major PV+ neuron subtypes found in the PFC, chandelier (ChCs) and basket cells (BCs), are thought to play different roles in cortical circuits, but the trajectories of their physiological maturation have not been compared.

Using two separate mouse lines, Dr. Takeaki Miyamae, together with colleagues in the Department of Psychiatry?s Translational Neuroscience Program and the Department of Statistics, found that in the mature PFC both ChCs and BCs are abundant in superficial layer 2, but only BCs are present in deeper laminar locations. This distinctive laminar distribution was observed by postnatal day 12 (P12), when they first identified ChCs by the presence of axon cartridges. Electrophysiology analysis of excitatory synapse development, starting at P12, showed that excitatory drive remains low throughout development in ChCs, but increases rapidly before puberty in BCs, with an earlier time course in deeper layer BCs. Consistent with a role of excitatory synaptic drive in the maturation of PV+ neuron firing properties, the fast-spiking phenotype showed different maturation trajectories between ChCs and BCs, and between superficial versus deep layer BCs. ChC and BC maturation was nearly completed, via different trajectories, before the onset of puberty. These findings suggest that ChC and BC maturation may contribute differentially to the emergence of cognitive function, primarily during early postnatal development.

This article appears in the Journal of Neuroscience.  Click here to view the abstract.