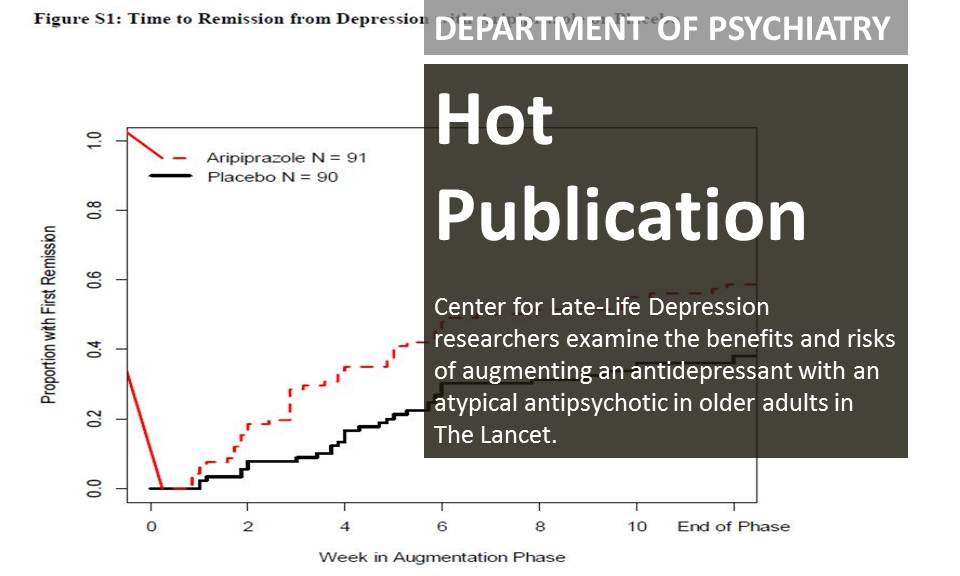 Treatment-resistant major depressive disorder is common and potentially life-threatening in older persons, in whom little is known about the benefits and risks of augmentation pharmacotherapy.  Dr. Charles Reynolds and collaborators from Washington University and the University of Toronto conducted a multi-site, placebo-controlled, randomized clinical trial to test the efficacy and safety of aripiprazole augmentation for older adults with treatment-resistant depression.  Of the 468 participants aged 60 and older with current major depressive episode treated with venlafaxine extended-release (ER), 96 did not complete this open phase, 191 remitted, and 181 did not remit and were randomized to 12 weeks of double-blind augmentation with aripiprazole or placebo. Participants were randomized in blocks and stratified by site. The primary endpoint was remission, defined as Montgomery-Asberg Depression Rating Scale scores <10 at both of the final two consecutive visits.  The investigators also assessed resolution of suicidal ideation, and safety and tolerability with cardiometabolic and neurological measures.  Analyses were conducted according to the intention-to-treat principle.

The researchers found that older adults on aripiprazole had a higher remission rate than those on placebo (44% versus 29%). Overall, remission was stable during 12 additional weeks of continuation treatment. The resolution of suicidal ideation was more marked with aripiprazole than with placebo. Akathisia was the most common adverse effect (27% of participants on aripiprazole). Compared to placebo, aripiprazole was also associated with more Parkinsonism but not with treatment-emergent suicidal ideation, QTc prolongation, or increases in adiposity, glucose, insulin, or lipids.

About one-half of older adults with a major depressive disorder do not remit with first-line antidepressant pharmacotherapy. Aripiprazole has a favorable risk/benefit ratio in these older adults, most of whom receive treatment in primary care or general medical settings.   Findings from this project provide clinicians with evidence on the benefits and risks of augmenting an antidepressant with an atypical antipsychotic, aripiprazole, in older adults with a depression that did not remit with a serotonin-norepinephrine reuptake inhibitor.

This article appeared online in the journal The Lancet. Click here to view the abstract.