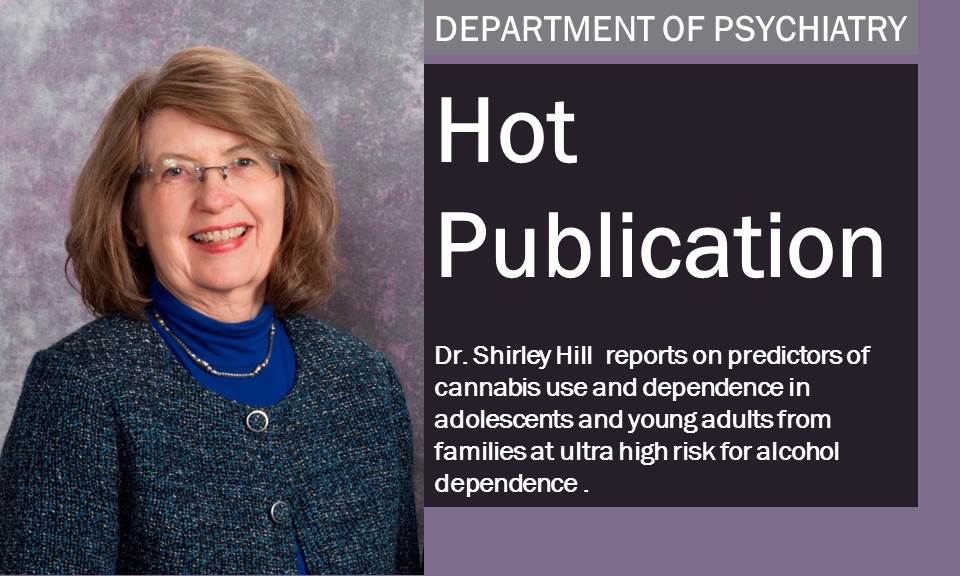 Cannabis use is common among adolescents.  Identifying the factors associated with continued heavy use into young adulthood and development of cannabis abuse and dependence is of considerable importance. The role of familial risk for addiction and an associated endophenotype, P300 amplitude, has not previously been related to cannabis use and dependence.

Dr. Shirley Hill led a prospective longitudinal study spanning childhood and young adulthood exploring these factors, along with genetic variation, and cannabis use behaviors in 338 young adult offspring from high and low familial risk for alcohol dependence families. They collected P300 data multiple times in childhood and tested the association between young adult patterns of cannabis use or cannabis abuse/dependence with genetic variation in the cannabinoid gene (CNR1), the ANKK1-DRD2 gene, and childhood developmental trajectories of P300.

Dr. Hill and her team characterized patterns of cannabis use in these young adults by three patterns - no use throughout, declining use from adolescence through young adulthood, and frequent use throughout. Following the low P300 trajectory in childhood predicted cannabis abuse and dependence by young adulthood.  A four SNP ANKK1-DRD2 haplotype (G-G-G-C) was found to be significantly associated with the frequency of use patterns. Although CNR1 variation overall was not significantly associated with these patterns, among individuals with cannabis abuse/dependence the presence of one or both copies of the rs806368 A > G minor allele conferred a 5.4-fold increase in the likelihood that they would be in the frequent and persistent use group rather than the declining use group.  This analyses provides an important delineation between biomarkers of cannabis initiation and biomarkers of abuse/dependence.

This article appears in the American Journal of Medical Genetics Part B: Neuropsychiatric Genetics.  Click here to view the abstract.