Guillermo Gonzalez-Burgos, PhD Promoted to Associate Professor of Psychiatry by the University of Pittsburgh School of Medicine 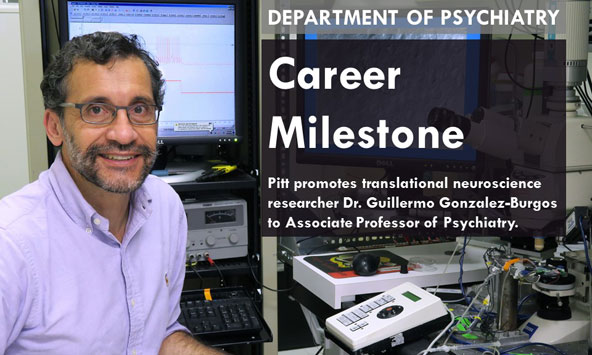 Congratulations to Guillermo Gonzalez-Burgos, PhD on his promotion to the rank of Associate Professor of Psychiatry by the University of Pittsburgh School of Medicine.

A graduate of the University of Buenos Aires in Argentina, Dr. Gonzalez-Burgos received his PhD in Neuroscience in 1995, and began his career at the University of Pittsburgh later that year. As a postdoc in the Department of Neuroscience, he studied cellular neurophysiology under the direction of Dr. German Barrionuevo. In 2002, Dr. Gonzalez-Burgos was appointed to the faculty of the Department of Psychiatry, in the Department's Translational Neuroscience Program. Since 2003 he has contributed significantly to multiple NIMH-funded neurophysiology projects conducted at the Silvio Conte Center for Translational Mental Health Research.

Dr. Gonzalez-Burgos' research focuses on understanding the functional architecture and development of the neural circuitry of the prefrontal cortex of rodents and non-human primates, using predominantly patch clamp recordings, combined with 3D morphological reconstructions of neurons identified in vitro, in acute brain slice preparations. The projects lead by Dr. Gonzalez Burgos, investigating the electrophysiological and morphological features of neurons and small circuits of the macaque monkey prefrontal cortex, are among the few projects in the world conducting such studies. In addition to his contributions to studies conducted at the Conte Center, Dr. Gonzalez-Burgos has collaborated on numerous other federally funded research grants and is the recipient of two NARSAD Young Investigator Awards.  His work has resulted in over 50 publications, including book chapters, and peer-reviewed research articles and reviews, published in prestigious journals such as Journal of Neuroscience, Biological Psychiatry, Nature Reviews Neuroscience, Cerebral Cortex, Nature Medicine, and others with over 3,600 citations and a Google Scholar h-index of 33.

In addition to his extensive research activities, Dr. Gonzalez-Burgos continues to play an important role in the training of students, residents and postdoctoral fellows, and in service to the academic community.  He is currently Editor for the journals Frontiers in Neural Circuits and Frontiers in Neuroanatomy, and a regular ad hoc reviewer for prominent journals including Biological Psychiatry, Journal of Neuroscience, Journal of Neurophysiology, Cerebral Cortex and the European Journal of Neuroscience.  He also has performed grant reviews for a number of funding agencies including the National Science Foundation (US), The Wellcome Trust (UK), the Israeli Science Foundation, The Medical Research Council (UK) and the Human Brain Project (European Union). As an internationally-recognized expert in the study of cortical GABA neurons and their role in the pathophysiology of mental disorders, Dr. Gonzalez Burgos has participated in multiple international workshops and symposia in Mexico, Japan, Italy, Argentina, Spain and Netherlands.