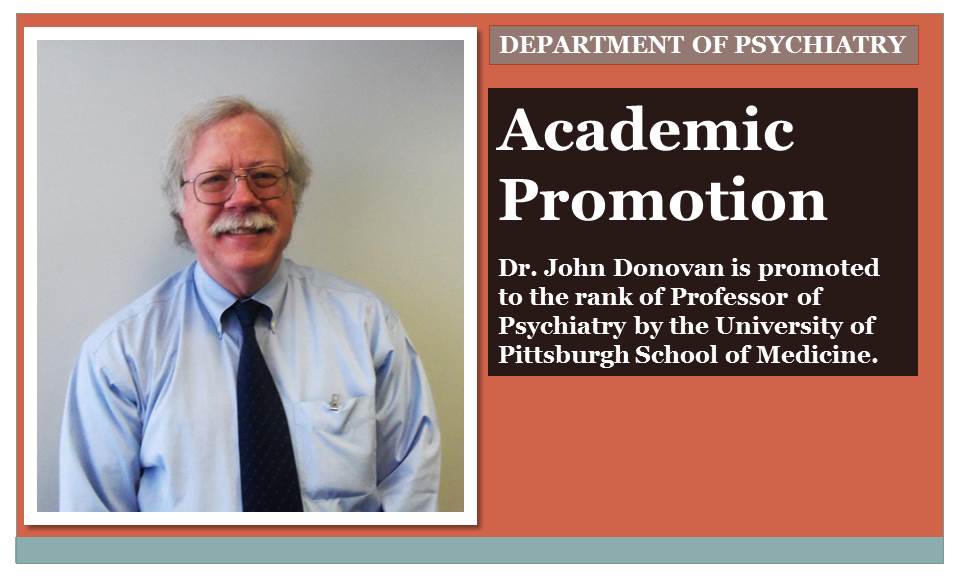 Congratulations to Dr. John Donovan on his promotion to the rank of Professor of Psychiatry by the University of Pittsburgh School of Medicine.

Dr. Donovan is a social psychologist and an expert on child, adolescent, and young adult problem behavior including alcohol and substance use and abuse. His work has advanced understanding of the interrelations among problem behaviors including problem drinking, marijuana use, other drug use, delinquency, drinking-driving, and risky sexual behavior among adolescents and young adults, as well as understanding of the risk factors for and negative consequences of alcohol involvement in these populations, and has jump-started research in the area of child drinking through his studies of the epidemiology, measurement, and etiology of this behavior.

Dr. Donovan was recruited to the faculty in 1992 to serve as the Scientific Director of the Pittsburgh Adolescent Alcohol Research Center (PAARC), which he did until 1997. He has served as the Principal Investigator for six federally funded R01s (including three competing renewals), and has collaborated on numerous research projects with colleagues in the Department.  His K02 career development award led to the initiation of the "Tween to Teen Project", a long-term longitudinal study of the developmental course of alcohol involvement from childhood (ages 8 or 10) into emerging adulthood (the 16th wave of data collection was just finished on these children at ages 21-23). His publication portfolio includes a book, book chapters, invited papers, and over 60 articles in highly-rated peer-refereed journals (with an h-index of 32, and 13 articles cited more than 100 times each). Dr. Donovan has also served on the editorial boards of Health Psychology and the Journal of Consulting and Clinical Psychology, and has been an assistant editor for the journal Addiction since 2005.

In addition to his research, Dr. Donovan has been actively involved in two federally funded T32 training programs, the Alcohol Research Training Program (funded by the National Institute on Alcoholism and Alcohol Abuse) and the Psychiatric Epidemiology Training Program (funded by the National Institute of Mental Health), supervising and mentoring postdoctoral researchers, graduate students, and junior faculty. He also served on the University?s Institutional Review Board for five years.  Dr. Donovan's reputation as an expert in the field of underage drinking has led to invitations to serve on two multi-year NIAAA expert panels in the areas of risk factors and the development of screening instruments, and he served for 15 years as a regular member of NIAAA grant review committees and NIH study sections reviewing colleagues' research applications (as well as serving on numerous special emphasis panels and as an ad hoc reviewer for study section meetings).  We look forward to his continuing contributions to the Department and to the field of psychiatric research.